Thanks for having me on the blog today, Adrian. I am new writer, L. Dean Pace-Frech, and I want to write a little bit about following your dreams.

In 2006, a co-worker shared with me that one of her bucket list goals was to write a novel. That comment awakened a desire in me that had been buried since I was in the fifth or sixth grade. After a visit to Pea Ridge National Military Park near Pea Ridge, Arkansas, my characters and their story revealed themselves to me and I started writing.

My first novel, A Place to Call Their Own, was set in 1865-1866 the end of the Civil War. After working on that manuscript for four years, instead of working on the planned sequel, I felt the need to move to a different time period, country, and set of characters. Leander and his story in Disappear With Me was the second novel I wrote and published last year.

From there I went on to write a third manuscript, The Higher Law, that is in the hands of beta readers right now. I hope to have it accepted by my publisher and released later this year. Taking a break from my historicals, I am working a fantasy merman story set in the early 1800s called Sartin.

Once I found my first story, I jumped right in and started writing. I didn’t know a lot about fiction, other than reading it, and definitely didn’t know very much about the publishing industry, much less all the changes going on in 2008. But I didn’t let that stop me. Along the way I’ve learned how to write, craft stories, create blog posts such as this as well as maintain my own, and promote my novels.

No matter what your dream is, whether it’s writing a novel, getting a new job, excelling at your current job, jump right in and start working toward it. Like Ginsberg’s quote says, follow your inner moonlight, don’t hide your madness and eventually you’ll get there. Look what I did in just a short amount of time.

Thanks for having me! 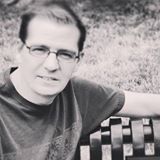 With inspiration from historical tourism sites, the love of reading, and a desire to write a novel, L. Dean Pace-Frech started crafting his debut novel, A Place to Call Their Own, in 2008. After four years of writing and polishing the manuscript, he submitted it for publication and Musa Publishing offered him a contract in early 2013. Disappear With Me is his second novel.

Dean lives in Kansas City, Missouri with his partner, Thomas, and their two cats. They are involved in their church and enjoy watching movies, outdoor activities in the warmer weather and spending time together with friends and family. In addition to writing, Dean enjoys reading and patio gardening.

Prior to novels, Dean did some technical writing in his career. He plans to write sequels to both A Place to Call Their Own and Disappear with Me and is currently working on a merman fantasy story.

When the War Between the States ended in 1865 many Americans emerged from the turmoil energized by their possibilities for the future. Frank Greerson and Gregory Young were no different. After battling southern rebels and preserving the Union, the two men set out to battle the Kansas Prairie and build a life together. Frank yearned for his own farm, away from his family—even at the risk of alienating them. Gregory, an only child, returned home to claim his inheritance to help finance their adventure out west.

Between the difficult work of establishing a farm on the unforgiving Kansas prairie, and the additional obstacles provided by the weather, Native Americans and wild animals, will their love and loyalty be enough to sustain them through the hardships?

Love is greater than hope or faith, but can Reverend Leander Norris convince a jury that the love he shares with another man is natural?

In 1910, the United Kingdom was in turmoil. King Edward died after only nine years on the throne. The social class system that upheld British society for centuries was being chipped away by social, political, and economic unrest across the Commonwealth. Amidst this backdrop, Reverend Leander Norris is accused of sodomy. After discovering his own self-worth and unconditional love, Leander finds the courage to stand up for what he believes is right and pleads not guilty to the charges. Throughout the trial, Leander’s past is revealed, including the temptations that bring the accusations against him. By the end of the trail, Leander is once again reunited with a romantic interest from the past by the end of the trial; it may be too late to rekindle any love that might remain, given the circumstances of the era and Reverend Leander’s likely sentence.