I’m so excited to share this cover with you all today! Fallon is a fellow WIPpeteer, and I’ve been seeing sneak previews and snippets from her books for awhile. I can’t wait for you all to get your hands on this one! 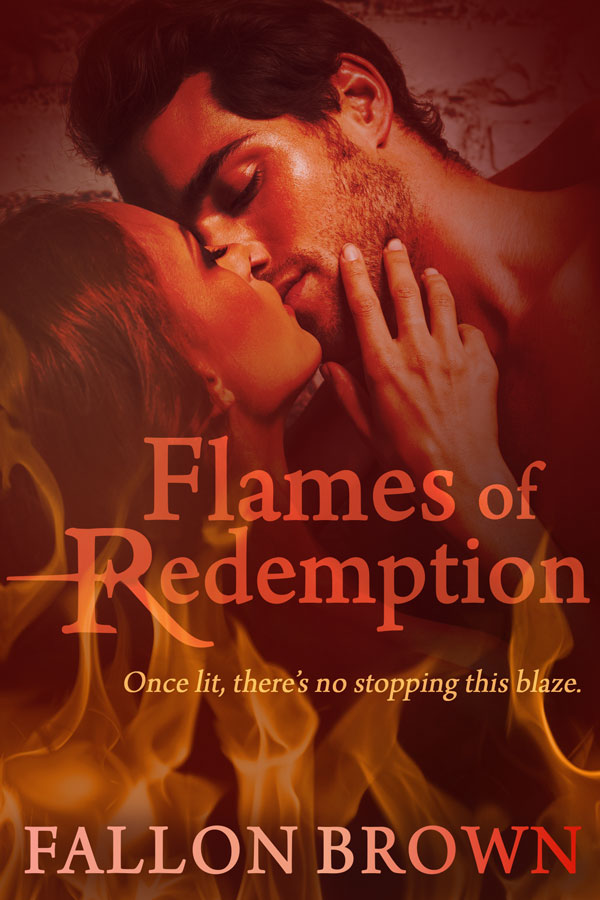 Kayla Brooke has firefighting in her blood. She followed her father’s footsteps into the Crystal Glen Fire Department, but when she shows an interest in the whys, she moves into her uncle’s path; fire investigation. Fighting the flames has cost her: a man she thought she’d loved and friends taken by the flames that call to her. After her fiance walked out on her because he could handle what she was, she never expected another man to light a different kind of fire in her blood. Until Adrian Riley ran into her life.

Adrian Riley came from a family of cops, but he decided to start over in a town where no one knows his family. Now, on the fast track to promotion, he thinks this new case could be the key to proving himself. Then, he butts heads with a hotheaded firefighter on the scene, and his whole world turns upside down. She could be the key to everything, or the one weakness that could take him down.

They fight the sparks that threaten to burn them both. But, once they light, there’s no stopping the blaze. Kayla’s been burned before, but this time the flames may consume her. When more fires start, they know it’s more than a simple case. But, when the arsonist seems to have turned his attention to Kayla, Adrian will do everything within his power to keep her safe, even stand between her and the fire.

When she stepped outside, though, the cop was still there. She couldn’t see his face as he leaned over the railing of the porch, but she still recognized him. The lines of his back were as strong as his front even with his coat on. Maybe it was a good thing that he reminded her of a fighter. He’d fight for this family, for Josh, if it did turn out to be arson.

Something about his posture now was different than when he’d been inside. The bowed back, his head hanging down. He couldn’t have been hurt in the time it took to walk out here, but she knew not all pain was physical. She was sure of it when a shudder passed over his body. What was wrong with him? She hadn’t gotten the impression he had known Josh. He hadn’t seemed affected inside.

She took a step toward him but backed away again when he spun toward her. His hand reached toward his side, where he was probably used to wearing a shoulder holster. He wouldn’t carry a gun to a funeral home though, would he? His jacket lifted, revealing the badge on his belt.

She held her hands up and worked up a smile. “I come in peace.”

He relaxed a bit, but something still held him rigid. The pain was evident in those hard blue eyes. “You’re one of Josh Nunley’s colleagues.”

His voice put her on edge. Her own back stiffened. “One of his sisters, so to speak. What are you doing here? Aren’t we allowed peace to grieve our brother’s loss?”

“I wasn’t trying to get in the way,” he said. “In fact, I tried to be as unobtrusive as possible. I’ve lost colleagues in the line of duty before. I understand. But I still have a job to do. I would think you’d want me to find who is responsible for your friend’s death.”

Yet he found he wanted to take care of her. Not like she would allow it. Still, he reached out and brushed a lock of hair behind her ear. She looked shocked by the gesture. “How much sleep have you gotten?” he asked.

She stepped back from him, bringing her own fingers to touch the lock of hair. “It doesn’t matter,” she said. “I can still do the job.”

“I never said you couldn’t.” He shoved his hands in his pockets. “Look, I don’t really know what your problem is with me. The only thing I’ve tried to do so far is my job. Are you really going to hold that against me?”

“Your job sucks, then. Coming to question us when we’re grieving for our friend. Crashing his funeral. We should be able to have those moments.”

“I didn’t question any of you. I was only there observing. Watching for some suspicious behavior. Anything that might give me a clue to who did this.”

“You think that’s so much better? What, do you think one of us did it?”

He kept silent at that accusation, not quite sure what to say to her. She apparently took it as confirmation. “You do, damn it.” She held her hands out in front of her. “Well, why don’t you arrest me now, Detective, if you think I’m guilty.”

“I never said you were guilty, or that I even thought that.” His voice was low, the calmness not matching the turmoil he felt. No, the anger boiled in his veins.

Fallon Brown was born and raised in a tiny town in the northwestern corner of Pennsylvania. At one time, she dreamed of having a cabin in the woods or mountains where she could be left alone to write. Instead she spent three years studying psychology before realizing that wasn’t for her. She now lives outside of a slightly larger small town in the same corner of her home state with her husband, two children, dog, and cat.

She spends her days interfering in the lives of fictional characters while trying to keep a semblance of a clean house. Often the clean house bit fails. She published her first novel, Duty to Protect, in April of 2014, and with all the characters crowding in her head, there is more to come.

You can find her around the online world at: