Welcome one, welcome all! I had the wonderful opportunity this week to interview Leigh Ellwood about her upcoming novel and about writing in general! You’ll find that interview below.

I am Leigh Ellwood. I write smutty stories about people who like getting naked and having sex. Some have more sex than others, some have sex with people of the same gender, some have sex with more than one person, and still others have sex with toys and things that require the use of batteries. My stories range from a few thousand words to well past 70k. The book list link above breaks everything down for you – genre, length, and other attributes. My books are available at Amazon, B&N, Smashwords, Kobo, and ARe. Really, just type my name in any bookstore site and something is bound to show up.

Tell us about yourself. (can include or just be the author bio if you would like)

Hi there. Here’s the tl;dr version: I’m Leigh Ellwood and I write romance and erotica. I have been published under this name for almost ten years, and I have books with Phaze Books, Ellora’s Cave (later this month) and Decadent Publishing. I have also self-published some of my backlist. I live in the South and love to read and do yoga, and drink wine!

What is one thing not in your bio, something totally random that only a few people know?

I do write under other pen names, but I keep them separate. If you really want to know them, you can always shoot me an e-mail.

What made you decide to write? If it even was a decision. And what kept you at it?

I wouldn’t call it a decision – more like something hardwired into me. It comes naturally, and I just enjoy telling stories. New ideas keep me writing, and if I sell some that’s a bonus.

Who has been your biggest inspiration and support in writing and in publishing? Doesn’t have to be an author or anything, and yes, it can be your mom or dad.

I’m grateful for my family and my closest friend; he cracks the whip when I need it. Teachers have encouraged me to write more, and of course I read constantly. I’m inspired by too many writers to name.

Why is it that you are an independent author? What prompted the decision to publish with a small press publisher, and how has that experience been?

Eventually I will pursue traditional methods. Right now, I feel the stories I write are better fits for smaller presses. I do write gay and lesbian erotica, and the readership is strong there among certain small pubs. I also tend to write certain lengths that trad publishers will not touch. Over the last decades I’ve had several victories and disappointments. At the end of the day, though, I’m writing and that makes me happy.

Tell us a bit about Sugar Rush, without spoilers of course.

Sugar Rush is a novella of lesbian romance, written specifically for a call Ellora’s Cave did for their Hot Pink line. It’s about a baker named Neve who connects with Judy, a shy girl with a sweet tooth. Neve becomes somewhat of a celebrity when she agrees to cater a same-sex wedding, which leads to various complications in her new relationship.

If you could meet one character in real life from Sugar Rush—who would it be and why?

What do you do when you get stuck in your writing? What happens when that nasty writer’s block sets down and refuses to budge—if you believe in writer’s block that is?

It happens to me. Sometimes if I’m stuck on a story I’ll set it aside and noodle on something else, listen to music, watch TV, anything to get the ideas flowing again.

Would you mind sharing some of your ups and some of your downs about writing and about publishing? Any advice to new and upcoming authors?

First thing to remember: it’s not a sprint. It’s a marathon. If you don’t hit immediately don’t believe it will never happen. I have published books that sold well, and others that flopped. Also, publish the way YOU want to – don’t feel you have to self-pub because everybody is doing it. If you want to submit to Harlequin or Ellora’s Cave, do it! You control your writing career.

Here’s a more serious question. What is it like to write in the LGBT realm of craziness that we all support? What’s it like to dip the toe into the rainbow through writing and publishing?

I like to call myself a storyteller. Sometimes, the stories are about same sex couples who fall in love. Happily Ever Afters aren’t limited to one type of person, and I enjoy reading LGBT stories as well as writing them. I like the community of writers, too. Everybody is different and believes in a common cause.

Why focus on the LGBT genre? What are the plusses and what are the minuses of doing so?

Like I said, sometimes a story calls for a same-sex pairing. If I could have done anything different, though, I might have considered a separate pen name for LGBT stories. I write all pairings, and sometimes a ménage. I kept everything under my Leigh name to build my backlist and variety. It’s great for readers who are interested in anything, but this way I’m also unpredictable. A reader may wish for an M/M story from me, and I publish F/F first. So I can understand that. 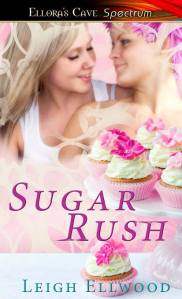 Baker Neve Rush is surprised to receive social media attention, both the good and bad varieties, after agreeing to bake a wedding cake for a lesbian couple. She cares about people’s tastes in pastries, not sexual partners. The newfound fame has gained her new customers—as well as one resurfaced ex. Gianna stirs up memories Neve would rather forget, and an impromptu flirtation with a client might just do the trick.

Judy Goldsmith finds Neve’s open-mindedness refreshing and attractive, and isn’t above a little scheming to get to know her better. As Neve and Judy satisfy each other’s sweet tooth in the most pleasurable ways possible, feelings begin to blossom. But their deepening attraction may not survive a little white lie…and an even bigger, darker secret.

FDR High Class of 2004 graduate, Glenn Carson contacts fellow alumni to get a list of who will be attending the upcoming festivities. One call to a disgruntled former student leaves him shaken—apparently, not everyone is looking forward to the reunion. Hoping to ease his frustration, he contacts the 1Night Stand service for a relaxing and passionate encounter.

Known as “Mumbles” to former classmates, Rod Maloney would prefer to focus on the present and his successful business. However, past tragedies continue to haunt him, so he requests Madame Eve find him a man to show him a hot time and help him forget his troubles.

Will their one night together lead to a reunion after all?