Coming Out: Is it still relevant?

Recently I came across a question posted in a Facebook group that got me thinking. The question was whether you would come out as gay if you knew your parents would have a heart attack. Most of the comments said no or hell no, while others said they would come out as gay no matter what their parents thought and that it was about being happy about who you are.

So the question that came to mind was something I think had to be discussed; is coming out of the closet still relevant in our day and age?

I am a gay man and my family knows this, though I never came out as gay. It was never about the fear of rejection, but rather the fact that I felt no need to make an announcement of it. In my opinion, announcements are reserved for pregnancies or lottery winners. Why would anyone feel the need to announce themselves to their family?

A person is either born black or white (or any other ethnicity), male or female, tall or short, etc. You didn’t have to announce your ethnicity, so why announce your sexual orientation? Most people feel that they have been hiding in the closet and the only way they can feel free is to announce to the world who they really are. But as I’ve come to realize, your family and friends know long before you made an official announcement of it.

There’s an increasing trend of persecution of gay people in African countries. Uganda and Nigeria have outlawed homosexuality and made it a punishable offence with some men facing 15 years in prison for being who they are. The thing that makes this persecution in African countries so frightening is that none of these men announced that they were gay. They didn’t flaunt it like the gay guys portrayed in sitcoms from the 90s. They were ordinary men who hid their true identity from a country built on tradition that doesn’t include homosexuality. It is seen as a perversion in some countries and frowned upon, but these two countries are at the forefront of heinous crimes against humanity. People’s houses are being raided and some burnt down in the persecution of gays. There was even an incident where a mob forced two men to have intercourse while being stoned.

These men in Uganda and Nigeria were sought out based on their demeanour. No matter how masculine a gay man is, there are still effeminate traits that hint at his sexuality – though it may not be as obvious as a flamboyant queen, if you know what to look for you will notice it. These men being persecuted were suspected of being gay because of rumours that started about their demeanour in everyday life.

In developed Western Countries, we love to think we have to come out of the closet to be true to ourselves; to be accepted. In truth, the world already knows you are gay. It doesn’t matter whether you are a masculine bear, or a skinny twink or a nerdy otter kind of man. You’ve sent out signals that hinted at your sexuality. Coming out is more a peace of mind for yourself rather than announcing to the world that you are homosexual. I think in a way it is still relevant to come out as being gay, but not in a way you might think.

I don’t see why a fanfare has to be made about coming out. There are no laws carved in stone saying that you have to blurt it out over dinner, or have a coming out party. Your family and friends already know you better than you know yourself and they are waiting to see you happy. The essence of coming out is not saying, mom and dad, I am gay, but rather accepting yourself for who you are and acknowledge the truth the world already knows.

The simplest way, I would think is to simply introduce the guy you’ve been dating to your family. That, to me is coming out enough. There’s nothing more to it.

I believe that even though you might not think it, your family and the world are ready to accept you for who you are. Religions are coming to accept homosexuals and I think it is because they have come across something profound – something I came across about a year or two ago. Some religious groups love saying that God created Adam and Eve, not Adam and Steve. Some religious groups love referring to certain passages in the Bible to back up their argument that homosexuality is a sin, but they are omitting passages that clearly indicates that Jesus never spoke ill of homosexuals. The Bible is written in riddles, almost like the Hollywood movie National Treasure. You need to know how to decipher clues and riddles in order to truly understand the Bible, and the reason for this is that one cannot simply go around blurting out the secrets of the universe. 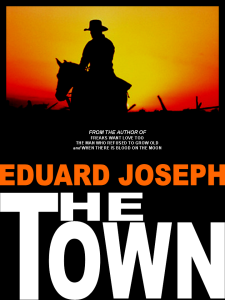 My book “The Town” (which is available as a free download from smashwords.com) deals with the issue of whether homosexuality is a sin or not. It is a coming of age story and looks at Biblical evidence which indicates that God created homosexuals the way they are. It is quite a controversial read and I would only suggest it to open-minded readers, but it’s something I feel every gay man and woman needs to read. It will put an end to the age old questions plaguing our minds; questions like why am I different? Am I really going to hell or is the pastor just full of it? I’ve been told that the book is blasphemous and based on vague little facts that’s been misinterpreted, but that’s just what religion is, isn’t it? It’s open to interpretation and who’s to say who is right and who is wrong?

I’m a 29 year old indie author from the concrete jungle of South Africa. After a few failed attempts at getting a publisher to recognise my talents, I went the self-publishing route and never looked back. I just loves a good mystery, so I incorporate elements of mystery, drama and horror into my short stories, novellas and novels. My biggest inspiration is my wild imagination (and nightmares of course), so if you’re about to read one of my stories be prepared for quite a few twists.

Don’t forget to enter the Author Corner Giveaway! It ends May 31st!  Here’s the Giveaway.